Odd Boy Out:  Young Albert Einstein by Don Brown, is a short biography of Albert Einstein, highlighting his younger years.  As a children’s picture book, the text is not lengthy nor is it extensive in details.  It is, however, written accurately, citing several sources in the bibliography.   Brown also included some supplementary details in his “Author’s Note.” 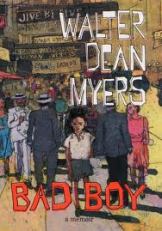 Walter Dean Myers attempted to give a balanced depiction of himself, and his own life in Bad Boy: A Memoir.  At the end of his book he wrote “In my heart I’ve always wanted to do the right thing and be thought of as a good person.  Even here I see that I’ve excluded many of the discipline problems I had in school.” (p. 205).  Myers describes his humble beginnings, living in a flat in Harlem.  “The apartments weren’t designed for that many, but that was what Harlem was about working people doing the best they could.” (p. 22).  Myers discusses the fights he got into, his best friend who had been homeless, and the poverty of his own family.  He also shared how his father’s advice was about hard work providing the only success “The white man won’t give you anything, and the black man doesn’t have anything to give you.  If you want anything out of life, you have to get it yourself.”  (p. 122).  This statement is consistent with portraying a subject (or in this case oneself) accurately, as it glorifies the eventual hard work that Myers put into writing rather than any superhero gifts that he was  showered in from birth.

The Life and Death of Adolf Hitler

Giblin, in trying to reflect Hilter fairly, wrote The Life and Death of Adolf Hitler as a balanced look at a human being.  Giblin wrote of Hitler’s early years, with a father who took his rage out on his sons, including Adolf.  (pp 6-7).  Giblin also described the shame that Hitler felt when rejected twice from art school in Vienna, and how he stayed on in Vienna regardless.  (pp. 10-13).  Once Hitler joined the German army and began his rose to power, he showed signs of stress and anxiety.  Giblin mentioned these episodes of anxiety several times throughout the book, including page 66 “… he admitted to the local Party leader that he suffered constantly from outbreaks of perspiration, trembling in his arms and legs, and severe stomach cramps. “  Giblin was also sure to include times when Hitler felt the opposite, like on page 156 “He might still suffer from stomach upsets and sleepless nights, but he confided in one Nazi commander that he felt as if he had evolved into a ‘superhuman state’ so that he was now ‘more godlike than human.’”  Giblin also was certain to incorporate the several times that Adolf Hitler contemplated suicide, right before being arrested in 1923 (p. 44), in 1932 when Hitler was trying to become the Chancellor of Germany (p. 70), again in January, 1945, after Hitler’s defeat in the Battle of the Bulge (p. 201), and finally when he and Eva (his wife of about twelve hours) ended their lives on April 29, 1945.

One response to “Biographies, Memoirs, and such…”